Presents :Topics in Cardiology and Mental Health for PCPs

IMPORTANT NOTE: All conferees, their families, and guests must book their cruise within the CEI meeting group through Continuing Education, Inc./University at Sea® at 800-422-0711 or by registering online. This ensures our company can provide conference services and complimentary social amenities to all meeting participants and their guests. Thank you for your cooperation.
Target Audience
Primary Care Physicians, Internists, Physician Assistants, Nurses, Nurse Practitioners
Program Purpose / Objectives
Topics:
Conference Sessions generally take place on days at sea (as itinerary allows), giving you plenty of time to enjoy your meals, evenings and ports of call with your companion, family and friends. 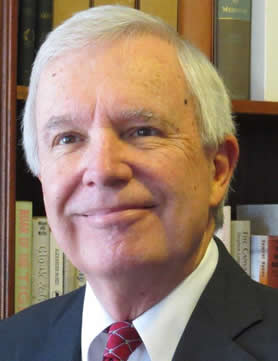 He completed his Ph.D. at Indiana State University, and subsequently completed an internship at the Family Medicine Residency at Union Hospital in Terre Haute, Indiana. He was on the faculty of that residency until 1985, when he joined the faculty of the Family Medicine Residency at Bayfront Medical Center in St. Petersburg, Florida, and the Department of Family Medicine at the University of South Florida. He was active in the Society of Teachers in Family Medicine, serving as the co-chairman for a national task force on behavioral sciences in family medicine residencies. He developed an interest in trauma, and served as the state coordinator for disaster mental health services in the state of Florida.

He recently completed a 25 year teaching career with Bayfront Health System, where he was Director of Medical Education, and Chairman of the Institutional Research Review Committee.
During his tenure, he spoke nationally in the area of psychosocial aspects of geriatric care.

Now in full-time private practice in St. Petersburg, Florida, Dr. Carnes devotes his time to geriatric patient care, and teaching family medicine residents. His clinical interests include the psychological aspects of trauma, behavioral medicine, and geriatrics. He is also a regular speaker for University at Sea.

Dr. Pyhel joined The Heart and Vascular Institute in 2013. He has been in practice in St. Petersburg for over 35 years. He received his undergraduate degree came from Seton Hall University in South Orange, N. J. His Medical Degree was obtained from Drexel University (formally Hahnemann University) in Philadelphia, PA.
Dr. Pyhel completed his residency and internship at Hahnemann Hospital in Philadelphia and went on to do his Cardiology Fellowship at Indiana University School of Medicine in Indianapolis.

He is American Board certified in Internal Medicine and Cardiovascular Disease and a Fellow of the American College of Cardiology. Dr. Pyhel was formally Chief of Staff at St. Anthony's Hospital, a member of the Executive Committee and Director of the Coronary Care Unit.

He started the first Cardiac Rehab Program in Pinellas County in 1983 and served as Medical Director until 2013.

In 2004 he received the Allegany Franciscan Humanitarian Award, and in 2013 the Hippocrates Award. He was Clinical Assistant Professor, Department of Family Medicine, at the University of South Florida and taught cardiology to family practice residents from Bayfront Medical Center.
Previously, Dr. Pyhel was the cardiovascular team physician for the Tampa Bay Rays Major League Baseball Team.

Dr. Pyhel has been happily married to his wife, Gail, for 48 years. He has two children and three grandchildren.
Accreditation

Designation: Continuing Education, Inc. designates this live activity for a maximum of 16 AMA PRA Category 1 Credits™. Each physician should claim only the credit commensurate with the extent of their participation in the activity. 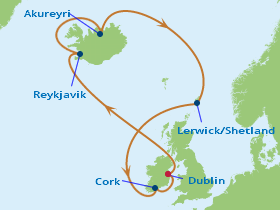 Ports of Call
Akureyri, Iceland - Akureyi, Iceland's second largest city‐affectionately known as the Capital of North Iceland‐ is one of the country's most important ports and fishing centers. Today, Akureyi is creating something of a buzz for its cool café scene, growing gourmet movement and bustling nightlife. But don't let that fool you. The atmosphere here is always laidback. From a fabulous summer festival program (energized by the near 24-hour daylight), to some of the best winter skiing you could wish for, Akureyi is a great base for exploring Eyjafjörður, Iceland's longest fjord, all year round.
Cobh (Cork), Ireland - Cobh is just a short train ride to charming Cork, Ireland, whose hilly streets echo with the music of what is renowned to be Ireland's most talkative citizenry. Visit local artisans and witness their skills in the arts of weaving and cutting crystal. The charming English Market is a great place to get a taste of the local flavors (including the chance for an excellent meal at the Farmgate Cafe located within). Also, Cork's lovely art museum has many fine works by lesser known artists from the last few centuries.
Dublin, Ireland - Dublin, the fair city, invites you to wander the streets trod by Joyce, Yeats and Oscar Wilde. Drop in at pubs with mahogany bars and stained glass. In the Trinity College Library, feast your eyes on the illuminated 9th-century Book of Kells. Sample the world's most famous stout at the original Guinness Brewery. And, of course, there are plenty of shopping opportunities  from a souvenir shillelagh to Waterford crystal.
Lerwick/Shetland, Scotland - Almost 100 islands make up the Shetland Islands, which sit on the northernmost part of the British Isles. Lerwick is Shetland's only town and is a cosmopolitan seaport that offers warm hospitality to its visitors. The old waterfront is filled with pleasure boats, visiting yachts, and more. Travelers can experience everything from lively "theme" bars and clubs to a Town Hall that boasts breathtaking stained glassed glass windows, each with its own story.
Reykjavik, Iceland - Iceland's capital and largest city is located on the country's southwest coast at the head of Faxafloi Bay. Settled in 877 AD, Reykjavik has grown into an important seaport and center of government and education with theatres, museums and observatories. Interestingly, this modern city still chooses to use water from nearby hot springs to heat all of its buildings. Prices are Per Person, Double Occupancy, Subject to change
3rd/4th in Stateroom - Please Call for Pricing
Port Charges, Taxes & Fees $378.91 per person
Deposit: $450 per person
Important Note: Not all staterooms within each category have the same furniture configuration and/or facilities. Appropriate symbols within the rooms on the deck plans describe differences from the stateroom descriptions . All information is subject to change.