Topics in Primary Care and Gastroenterology

IMPORTANT NOTE: All conferees, their families, and guests must book their cruise within the CEI meeting group through Continuing Education, Inc./University at Sea® at 800-422-0711 or by registering online. This ensures our company can provide conference services and complimentary social amenities to all meeting participants and their guests. Thank you for your cooperation.
Target Audience
Physicians, Physician Assistants, Nurses, Nurse Practitioners. Attorneys, Psychologists
Program Purpose / Objectives
Topics:
Conference Sessions generally take place on days at sea (as itinerary allows), giving you plenty of time to enjoy your meals, evenings and ports of call with your companion, family and friends. 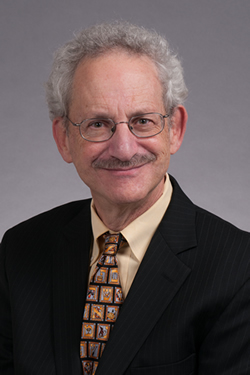 Dr. Peter Buch is a clinical gastroenterologist with 37 years of teaching experience. Teaching is his passion and his style is case based, practical, interactive and fun.

He is a graduate of Downstate Medical Center (NY) He completed his Internship and Residency in Internal Medicine and his Fellowship in Gastroenterology at Long Island Jewish-Hillside Medical Center (now a division of Northwell Health).

Dr. Buch has been honored to speak at dozens of national conferences. He looks forward to learning with you! Successful completion of this CME activity, which includes participation in the evaluation component, enables the participant to earn up to 14 (part II) MOC points in medical knowledge in the American Board of Internal Medicine's (ABIM) Maintenance of Certification (MOC) program. Participants will earn MOC points equivalent to the amount of CME credits claimed for the activity. It is the CME activity provider's responsibility to submit participant completion information to ACCME for the purpose of granting ABIM MOC credit. 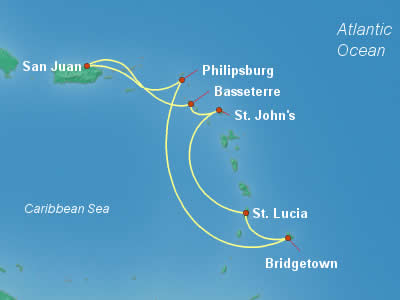 Ports of Call
San Juan, Puerto Rico (Embark and Debark) - In days of yore, the waters near Puerto Rico teemed with pirate ships commanded by the likes of Sir Francis Drake. Aye, they are long gone, but in their wake they have left an island of national treasures: La Casa Blanca, built in 1501 for the island's first governor, Ponce de Leon; the cobblestone streets of Old San Juan; the tropical rain forests of El Yunque. Port tips from our blog
Basseterre, St. Kitts - The island England zealously defended from Brimstone Hill, the "Gibraltar of the West Indies." In Basseterre, a mini-London, there's Piccadilly Circus to shop and a gingerbread version of Big Ben by which to check the hour.
Bridgetown, Barbados - An island some say is more British than Britain. Here, cricket is the national sport and afternoon tea goes without saying. But Barbados is true blue Caribbean as well, with classic sand beaches, and wild monkeys in the jungle.
Castries, St. Lucia - Watch natives fashion boats from gum trees, write postcards in a Creole cafe. Shop for black coral carvings and exquisite silk-screened fabrics.
Philipsburg, St. Maarten - On an island under two flags (St. Martin/St. Maarten has been amicably shared by the French and the Dutch for almost 350 years), your cruise will dock on the Dutch side. There, you can sample the Dutch treats of Philipsburg: chocolate, cheese, delftware. There are, of course, lovely restaurants and bars lining the beautiful beach giving you ample opportunity to satisfy your appetite and "wet your whistle."

Or, take the short trip to the French side to shop for Parisian fashions and perfume or enjoy the more secluded beaches found there.
Saint Johns, Antigua - An enterprising man, Codrington had come to Antigua to find out if the island would support the sort of large-scale sugar cultivation that already flourished elsewhere in the Caribbean. His initial efforts proved to be quite successful, and over the next fifty years sugar cultivation on Antigua exploded. By the middle of the 18th century the island was dotted with more than 150 cane-processing windmills--each the focal point of a sizeable plantation.

Freedom of the Seas Important Note: Not all staterooms within each category have the same furniture configuration and/or facilities. Appropriate symbols within the rooms on the deck plans describe differences from the stateroom descriptions . All information is subject to change.
PRICING SUBJECT TO CHANGE: Although subject to change at any time, the listed prices are generally available up to about 90 days before sailing; at that time they convert to typically higher, market rates.
CANCELLATION PENALTY POLICY WILL APPLY: Cancellation policies vary by cruise line, itinerary and length of cruise. When reserving your stateroom, please review the policy applicable to this cruise with our staff. We strongly recommend Travel Insurance to cover the unexpected.
FUEL SUPPLEMENT: Cruiselines may implement a fuel surcharge depending on the price of crude oil.
Questions? Call us at 800-422-0711.
We can assist you with all your travel arrangements. We'd be happy to help you plan your flights, hotels or tours before and/or after your cruise conference.