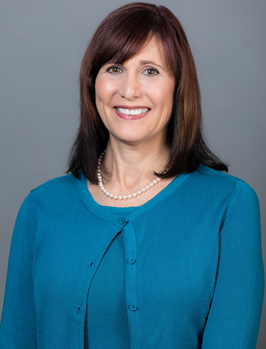 Robin K Blitz, MD, is a board-certified developmental-behavioral pediatrician and is the Senior Medical Director for the Special Needs Initiative at United Health Care. Dr. Blitz also continues her developmental pediatric practice at the Phoenix Indian Medical Center. She is a clinical associate professor in the Department of Child Health at the University of Arizona College of Medicine, Phoenix. She earned her medical degree from The Ohio State University, College of Medicine and completed her pediatric residency at Children's National Medical Center, in Washington, DC, followed by a fellowship in Developmental - Behavioral Pediatrics at the University of Maryland.

Dr. Blitz has more than 25 years of experience in providing care for children with special needs, educating healthcare providers, residents, medical students, educators, and families, as well as creating and directing different programs including the Developmental Clinic at the Phoenix Indian Medical Center (1997-present), the Developmental Center for Foster and Adopted Children at St. Joseph's Hospital (2001-2009), and the Developmental Clinics at Phoenix Children's Hospital (Fragile X Clinic, Pediatric Down Syndrome Program, ADHD Diagnostic Clinic, and Autism Diagnostic Clinic, from 2009-2017). Over the previous 3 years, she and her team at Phoenix Children's created Early Access to Care- Az, a learning collaborative for pediatricians, early intervention and school personnel across the state of Arizona, focused on early diagnosis of Autism and medical home care to children with Autism.

She is a fellow of the American Academy of Pediatrics and the Society for Developmental and Behavioral Pediatrics, along with being chosen as a Fellow of Zero-To-Three, the nation's leading resource on development in the first three years of life (1989). Dr. Blitz has served on many local and state committees, including being an Arizona trainer on Early Brain and Child Development. Most recently was appointed to the Governor's Advisory Committee on Autism, the Children's Health Committee of First Things First, the Arizona Telemedicine Council, the AHCCCS Telemedicine Policy Committee, and participated in the Developmental Screening Committee and Advocacy Committee of the AzAAP, as well as the Down Syndrome Medical Interest Group and the Fragile X Clinical and Research Consortium. She has received multiple awards including the Betty Kerr Volunteer of the year (2002), YWCA Woman of the year in Science and Research (2004), Talk of the Town Customer Satisfaction Award (2012), Mercy Maricopa RISE Award in Health and Innovation (2017), and many "Top Doctors" awards (Phoenix Magazine 2011-2017, US News and World Report 2013-2017, Castle Connolly Exceptional Women in Medicine 2017, Castle Connolly Arizona Top Doctors 2012-2017, and Castle Connolly America's Top Doctors 2013-2017).

David A. Colvin, MD, FAAP is board certified in general pediatrics and pediatric critical care medicine. Originally from Seattle, WA, he holds a bachelors of science in Microbiology from the University of Washington where he also pursued post-baccalaureate work in medical ethics. He received his doctor of medicine from the American University of the Caribbean school of medicine. Following general pediatric residency at the University of Nevada School of Medicine Reno, David served as fellow in Pediatric Critical Care Medicine at the Lucile Packard Children's Hospital at Stanford University. His research focused on cancer stem-cell biology in the labs of Dr. Michael Clarke and Dr. Irving Weissman.

After fellowship, Dr. Colvin returned to the Las Vegas area where he is clinical faculty at the University of Nevada Reno. He has served as residency site director for Sunrise Children's Hospital, Clerkship director for both pediatric and emergency medicine residencies in pediatric critical care medicine at Sunrise Children's Hospital and Medical Director for Pediatric and Neonatal Transport. Dr. Colvin's graduate education experience includes physician-as-educator training at Stanford University, the design and implementation of an individualized curriculum in critical care medicine for general pediatric residents, international lectureships and invited lectures for the American Academy of Pediatrics. Currently, Dr. Colvin resides in Seattle with his wife and children, where he continues to work in pediatric critical care medicine at Swedish Medical Center. David's interests include cycling, duathlons and civil aviation. 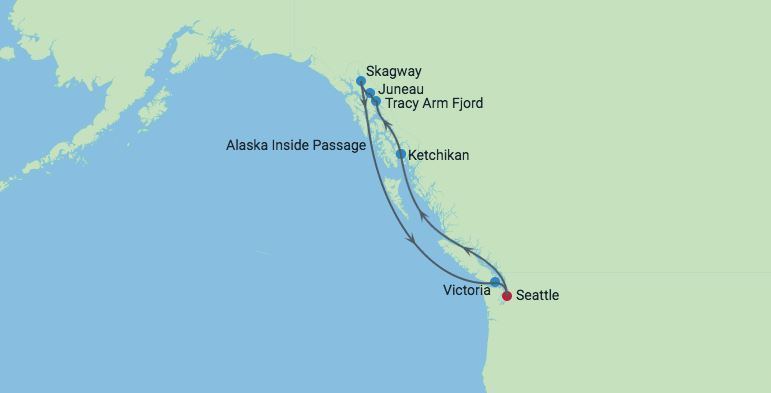 Ports of Call
Seattle, Washington (Embark and Debark) - The Emerald City of the Pacific Northwest, Seattle is one of America's most vibrant cities. Stroll its bustling waterfront (including Pike Place Market), visit the Space Needle, and find a great coffee-shop to enjoy in this coffee-loving city (the home of Starbucks). One of America's tech centers (Amazon and Microsoft are both headquartered here), the city is abuzz with the interesting people attracted to the opportunities to be found there. There is more than enough to see and do here to keep you busy for a day or two. If you have a little extra time, Seattle is a great place to visit.
Inside Passage - This is one of the most famously beautiful passages in all the world. It features virtually everything you came to Alaska hoping to see, including rain forests, glaciers, fjords and white-capped peaks. All of which create a setting that's perfect for viewing whales and sea lions.
Juneau, Alaska - In Alaska's capital, you can pan for gold at Gold Creek and taste salmon baked on an alderwood fire, mush sleddogs, flightsee the Juneau Ice Field, and walk right up to the Mendenhall Glacier at the park. This charming small city also hosts an excellent zipline course. And for the less adventurous, the Red Dog Saloon is near the dock.
Ketchikan, Alaska - Immerse yourself in Tlingit Indian culture as you view the world's largest collection of totem poles; kayak the colorful waterfront. Port tips from our blog
Skagway, Alaska - A frontier town perfectly preserved as the Klondike Gold Rush National Historic Park. Gateway to the Trail of '98, which you may explore by helicopter or vintage railcar. Port tips from our blog
Tracy Arm Fjord, Alaska - Amidst the pure silence, you'll sail past translucent blue icebergs silhouetted against a most dramatic backdrop of waterfall-laced rock walls ascending thousands of feet into the sky. This classic fjord, Tracy Arm extends over 30 miles and once seen, it is never to be forgotten.
Victoria, British Columbia - Stroll through the charming downtown of this very British city, with its double-decker buses, turreted castles, fine British woolens, tea and china. Or, just outside the city, visit the lush flora and fauna of Butchart Gardens. 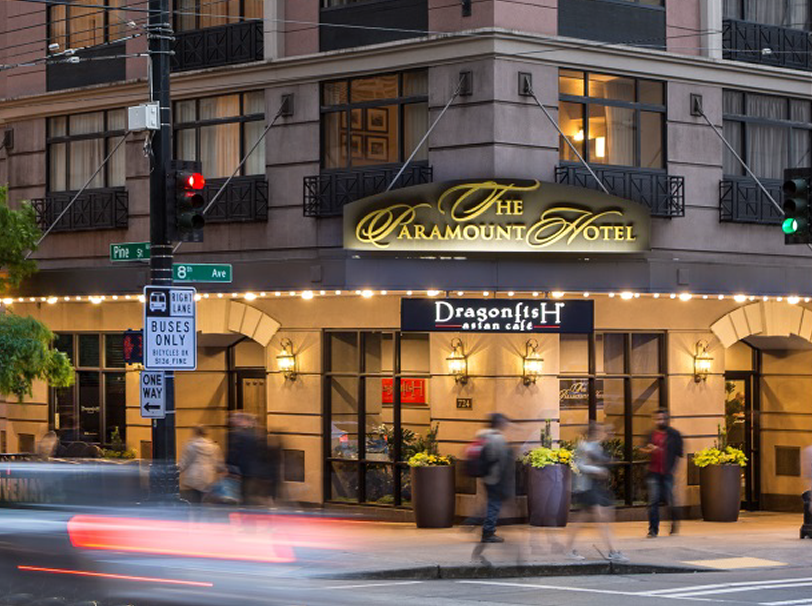 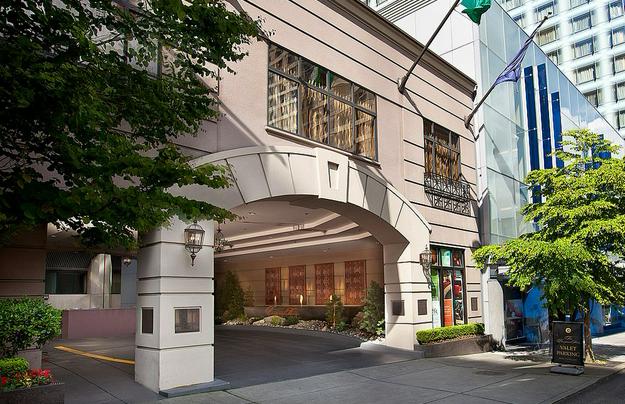 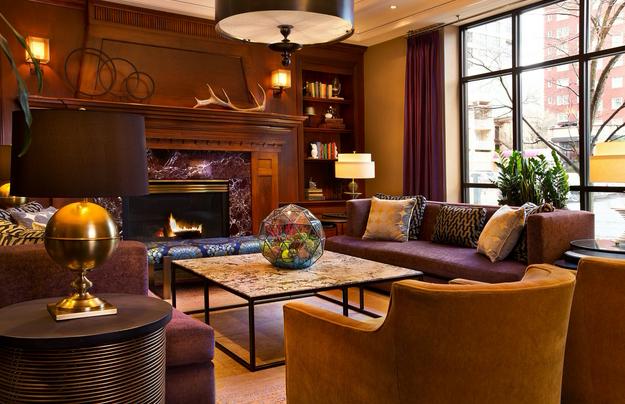 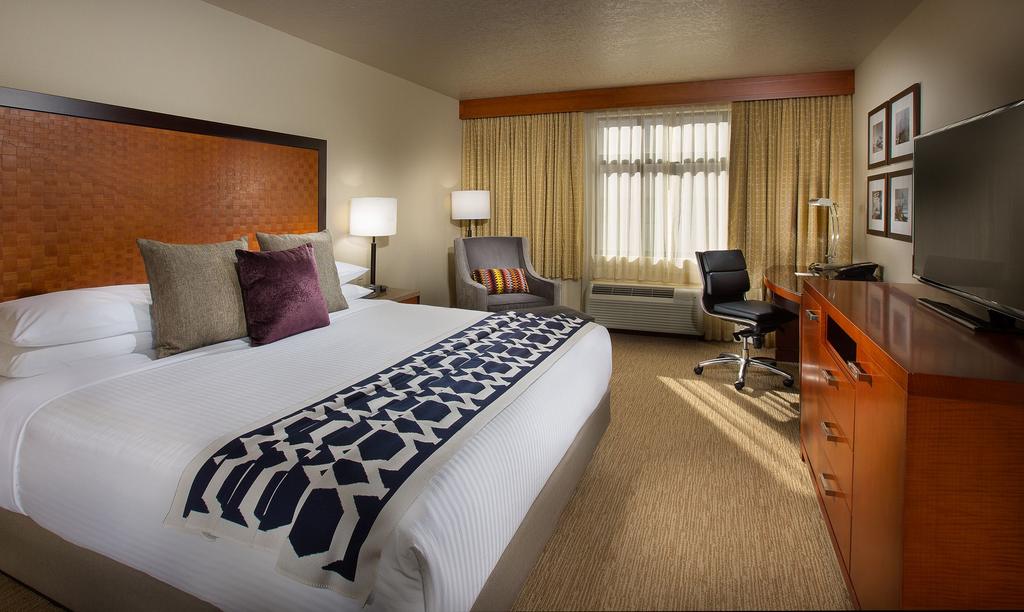 This Boutique Hotel is perfectly situated in the heart of downtown Seattle only minutes from the city's greatest treasures and within walking distance to everything our vibrant city offers such as Pike Place Market and Waterfront, Space Needle, Westlake Center, Washington State Convention Center and Paramount Theater; you can also enjoy world class dining, entertainment and shopping within a few blocks. The Paramount Hotel-Seattle offers travelers a relaxing retreat among the buzz of downtown Seattle.

Rates: per night rate- Run of the House-Single/Double occupancy; each additional adult is $20 per night. Taxes are additional (currently is 15.6% plus a $2.00 nightly tourism assessment.